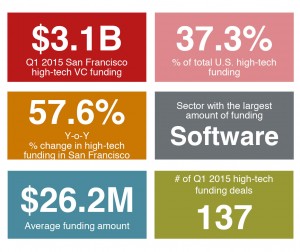 Because of the connection between tech VC funding and pricing/demand in the San Francisco real estate market it is worthwhile to keep track of funding activity.

Here is what VC funding in the first quarter of 2015 looked like for San Francisco tech firms, courtesy of Jones Lang LaSalle:

Venture capitalists continue to place their bets in the rapidly growing local tech economy. In Q1 2015 , San Francisco was the top market for VC dollars in the country for the second consecutive quarter. Silicon Valley shifted to the third spot nationwide for the first time since 2011. San Francisco accounted 4 of the 5 top high – tech VC backed deals nationwide. VC funding increased 57.6 percent since last quarter, due mainly to the second consecutive $ 1.0B Uber funding round. Uber, now valued at over $50B, leased over 100,000 square feet at 555 Market already this year and is in the market for more office space to accommodate for their rapid growth. Recently funded startups could look to expand, leading to additional demand for office space . 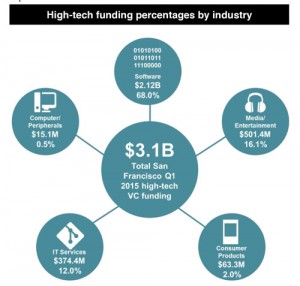 San Francisco offers a thriving tech ecosystem which creates the ecology required for breakthrough innovation. The influx of VC dollars may translate to higher wages to help recruit top talent which has been challenging for some tech companies. Despite the challenges, there are few places with as much access to experienced talent, investors and a community of like-minded entrepreneurs willing to help one another. The urban shift in venture capital and start – ups is in line with the view that dense cities, as opposed to sprawling suburbs, provide the ecology required for innovation. 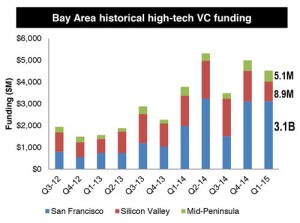 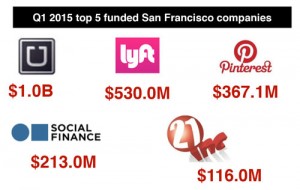