Its proximity to San Francisco’s iconic Haight Ashbury neighborhood makes Cole Valley an oft-forgotten neighborhood, but Cole Valley maintains a uniqueness and charm all its own. 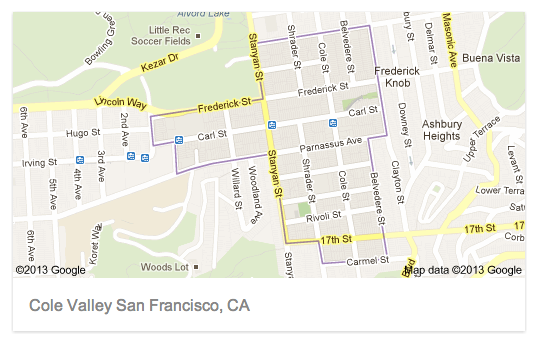 It is a neighborhood characterized by shady, tree lined streets, well maintained homes, excellent schools, and a sense of “community.”  The intersection of Cole and Carl Streets marks the business center where locally owned bakeries, cafes and restaurants are a culinary delight. Residents enjoy easy access to Golden Gate Park while a short trip on the N-Judah can drop them at Ocean Beach or Downtown. A steep walk from the center of the neighborhood is Tank Hill, where near 360 degree views of the cityscape are guaranteed to please.

Residents are largely families and young professionals and most of the businesses in Cole Valley are of the mom-and-pop variety, in lieu of chain stores or franchises, and shop owners are outwardly supportive of each other.

Food and coffee are the specialties in Cole Valley, as in San Francisco in general. In the three-block commercial strip along Cole Street and part of Carl Street, there are more than a dozen restaurants and cafés, some of which draw visitors from around the Bay Area., Zazie, for instance, is a magnet for locals on weekends for brunch. For historians and old-timers, traces of Cole Valley’s past are still visible. Above the Crepes on Cole awning, along the Carl Street side, remains the old sign for the Other Café, a comedy spot where Robin Williams and Dana Carvey performed before they hit the big time. Even more historic are the photos in the Kezar Bar and Restaurant dating from the early 1900s, when the region was home to dairy farms.

Cole Valley may not be one of the city’s most bustling tourist destinations, but it makes for a relaxing respite from the Haight, and there are enough attractions for a day’s outing.

Cole Valley Back Then

In its early days, Cole Valley was made up of farmland surrounding a pond.

Cole Valley grew up around the streetcar stop at the entrance to the Sunset Tunnel at the intersection of Carl and Cole Streets. Residents of the Sunset district lobbied in the early 1920s for a new street car to service the “Outside Lands”. Although there already existed transit lines, many wanted a tunnel to significantly cut down commute times.  In 1925, the Board of Supervisors voted for the proposed Duboce Tunnel route that is now the N-Judah line. That intersection is still the center of the neighborhood’s small business district, and the N Judah light rail line still stops there.

Usually associated as part of the Haight-Ashbury, this community definitely has a character all its own.  Close enough to the hustle and bustle of Haight Street, but quiet enough to enjoy a coffee out in one’s backyard sans the city sounds, Cole Valley combines the convenience of living in a city with the neighborhood connectivity of the suburbs. Not to say the neighborhood is at all boring! Fun is in our history! In the late seventies, Bob Ayres and Steve Zamek found “The Other Cafe” a pharmacy turned music/comedy club. Over the 10 years The Other Cafe was on the corner of Cole and Carl, such names as Robin Williams, Dana Carvey, Paula Poudstone and Whoopi Goldberg graced its stage.  If you’re looking around, you can still see the sign of the old club above Crepes on Cole.

Cole Valley was popular with dot-commers during the late 1990s dot-com bubble. Today the neighborhood is home to a mix of young professionals and some University of California, San Francisco residents and staff.