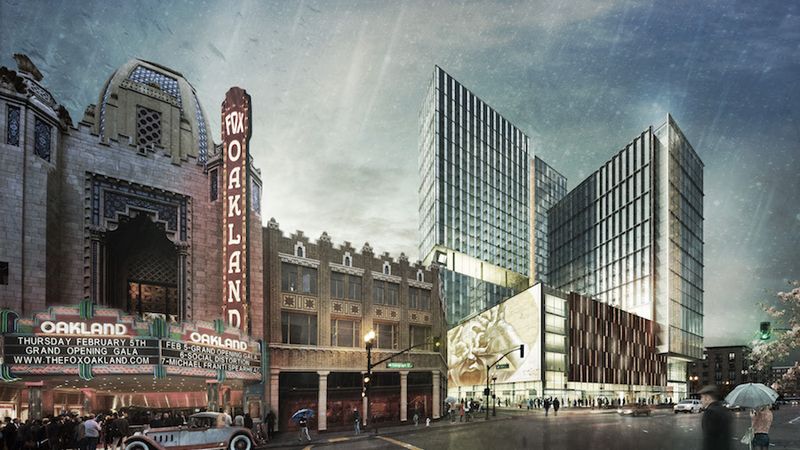 The city’s skyline is set to change for the first time in nearly a decade.

Oakland is about to get taller. For the first time in nearly a decade, the city has new high-rise buildings on the way, the latest a 27-story, mixed-use project at 1911 Telegraph Avenue, right across the street from the Fox Theatre, Henry J. Kaiser Park, and Uber’s future Oakland headquarters.

In December, Oakland’s Community and Economic Development Committee considered three competing hotel proposals for the vacant, city-owned site. CEDC has been keen for a new high-end hotel in Oakland for a while. “There has been no new supply of hotels coming into Oakland, and demand is going through the roof,” Mark Everton, owner of the Waterfront Hotel, testified to the committee.

But the winner, tentatively approved by the Oakland City Council at their Tuesday meeting (final approval will come only after community meetings and feasibility studies have been conducted), was San Diego-based Oliver McMillan, in partnership with Oakland’s Strategic Urban Development Alliance. The design calls for 168 hotel rooms, 330 residential units, over 56,000 square feet of retail space fronting Telegraph and 19th, and over 4,000 square feet of art gallery space. 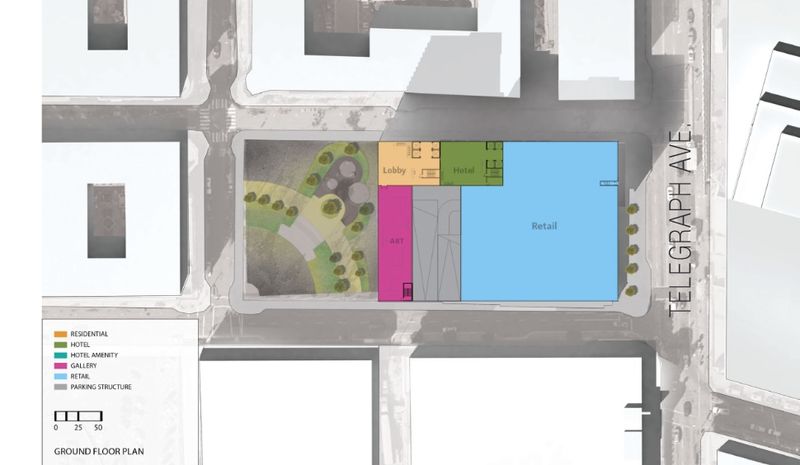 Oliver McMillan’s Dean Oliver made a holistic pitch to the city. “Most buildings are just about financial engineering. There’s usually not enough [input] from the creative side of the brain,” Oliver said.

The huge amount of retail space set the OM design apart, at more than four times the square footage of the next most ambitious retail design. “Oakland has been burned on retail before,” City Council President Lynette Gibson McElhaney noted, pressing Oliver on why he felt such a plan would succeed this time.

“We’re bullish on this market. We’re bullish on downtown Oakland. Retail is integral to this thing,” said Oliver. “We have companies we’ve worked with before interested in two-story spaces.” The presentation name dropped retailers like Nike and Vince as potential tenants. “It’s hard for retailers to come into a city without a critical mass. There’s potential on Telegraph Avenue for that.”

OM also promised “as many as 800” Oakland jobs in the building and that kiosk and pop-up spaces will be reserved for local restaurants unable to afford to open a full restaurant in the building. Artist renderings show a Best of Oakland market on the second floor.

The residential tower would be 15 percent affordable housing. “And we don’t bring people in through the back doors, ever,” Oliver added. “Those residents will come in right next door to those paying millions of dollars for a unit.”

As Inside Bay Area reminds us, Oakland has been speculating about what to build on 1911 Telegraph since the bygone age of 2002.